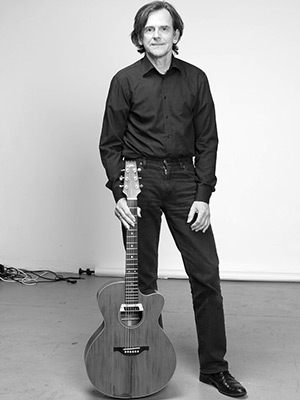 Markus Wienstroer started playing the violin at the age of seven. After that, he taught himself how to play guitar and began studying at the Robert-Schumann-Institute in Düsseldorf as a junior student.

He began his career with the guitar, which brought him into contact with almost all styles of music and led to concert tours and projects with such diverse artists as Joe Cocker, Till Brönner, the band “Die Höhner”, BAP or Andrea Berg, as well as to regular cooperations with the WDR and NDR Big Bands.

His guitar can be heard on countless recordings, including numerous No.1 hits. Markus Wienstroer is known to television audiences as the guitarist of the Helmut Zerlett Band in the Harald Schmidt Show. He is currently pursuing several music projects, is a lecturer at the University of Music in Osnabrück and regularly gives master classes.

What interests him most about AVRAM is the interaction of musicians from different stylistic origins.